Designing Data Intensive Applications(DDIA) has been praised by many people in the industry as a great book to bridge knowledge gap between theories of data systems and practical engineering. Mastering tradeoffs of each technology and apply them to solve real world problems take huge effort and constant learning; So I’m writing this post for my reading notes and some takeaways ;-)

Why we talk about data systems generally?

System can continue to work correctly even in the face of adversity.
Fault-tolerant / resilient: able to predict faults and can cope with them(certain types of course).

Many critical bugs are actually due to poor error handling. So to increase the rate of faults, we can trigger them deliberately(e.g. randomly killing individual processes without warning) to ensure that fault-tolerance machinary is continually exercised and tested. And we generally prefer tolerating faults over preventing faults.

Netflix: Chaos Monkey, a resiliency tool that help applications tolerate random instance failures by randomly terminates vm instances and containers that run inside of your production env, exposing engineers to failures more frequently to incentivize them to build resilient services.

Scalability is the term we use to describe a system’s ability to cope with increased load – System can deal with the growth in data volume, traffic volume or complexity.

There are some load parameters and the best choice of the parameters depend on the system architecture: it may be requests per second to a web server, the ratio of reads to writes in a database, the number of simultaneously active users in a chat room, the hit rate on a cache, or something else.

One example from Twitter:
the bottleneck of the scalability is not about the tweet volume but the fan-out(A term borrowed from electronic engineering, where it describes the number of logic gate inputs that are attached to another gate’s output. In transaction processing systems, we use it to describe the number of requests to other services that we need to make in order to serve one incoming request.) 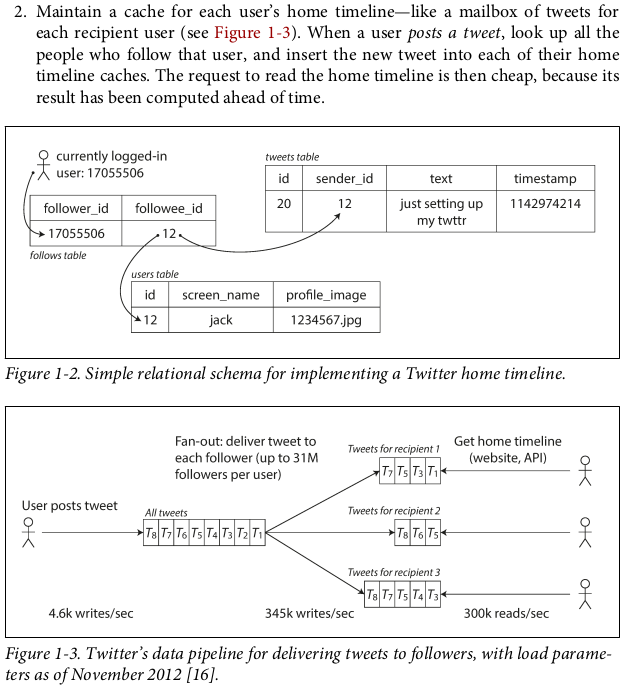 As shown, it’s better to do more work at write time and less at read time. But this also means posting a tweet requires extra work due to write to caches. And such distribution of followers per user is a key load parameter for discussing scalability.
Now the Twitter is moving to a more hybrid approach by combining both: Most users’ tweets continue to be fanned out to home timelines at the time when they are posted, but a small number of users with a very large number of followers (i.e.,celebrities)are excepted from this fan-out. Tweets from any celebrities that a user may follow are fetched separately and merged with that user’s home timeline when it is read, like in approach 1. This hybrid approach is able to deliver consistently good performance.

Since response time varies each time the user makes the request, we need to think of it as distribution of values. Usually it’s better to use percentiles. For example we sort the list of response time from fastest to slowest, the median would be a good metric to know how long users typically have to wait.

Same goes for checking the outliers: we just use a much higer percentiles(p95, p99 and p999 usually, meaeining how many thresholds are faster than particular thresholds), and high percentiles of response times, or tail latencies, are important because they directly affect the user experience of the service. Usually clients experiening bad response times are exactly those made most data storage/purchases, aka. most valuable customers. However, ensuring optimized response times(e.g. 99.999 percentiles) also means generating less revenue and thus does not yield enough benefit for the service providers’ sake.

Service Level Objects(SLOs) and Service Level Agreements(SLAs) ofen use percentiles to define the expected performance and availability of a service.
For example, customers can demand a refund if SLAs are not met.

Queueing delays ofen account for a large part of the response time at a high percentiles. As a server can only process a small number of things in parallel(For exmaple, limited by CPU cores). head-of-line blcoking refers exactly to a situation when a few slow requests hol up the processing of subsequent requests even though these subsequents are fast to process. So it’s important to measure response times on the client side.

Tail Latency Amplification: Even if only a small percentage of backend calls are slow, the chance of getting a slow call increases if an end-user request requires multiple back‐end calls, and so a higher proportion of end-user requests end up being slow. 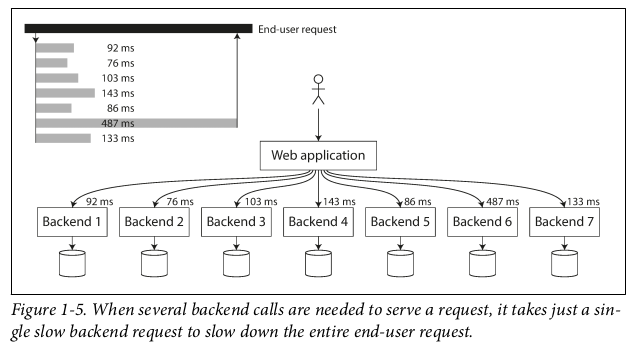 In real life, systems are elastic, meaning they can automatically add computing resource if detects a load increase(useful if loads are highly unpredictable); wheras others are scaled manually.

So far, there’s no magic scaling sauce – a generic, one-size-fits-all scalable architecture. Systems at this scale are usually designed specifically and problems contain the volume of reads, the volume of writes, the volume of data to store, the complexity of data, the response time requirements, the access patterns, or usually some mixture of all plus some other issues.

Many different people(engineering & operations) can both maintain current behaviour and adapt system to new use cases, and they should be work productively.

FANTASTIC Lagacy Code: every legacy in unpleasant in its own way.

The majority of the cost of software is not initial development but maintenance - fixing bugs, keepign systems operational, investigating failures and more. It’s hard to give general recommendations to deal with all legacy systems but we can follow these principles to avoid troubles as much as we can: 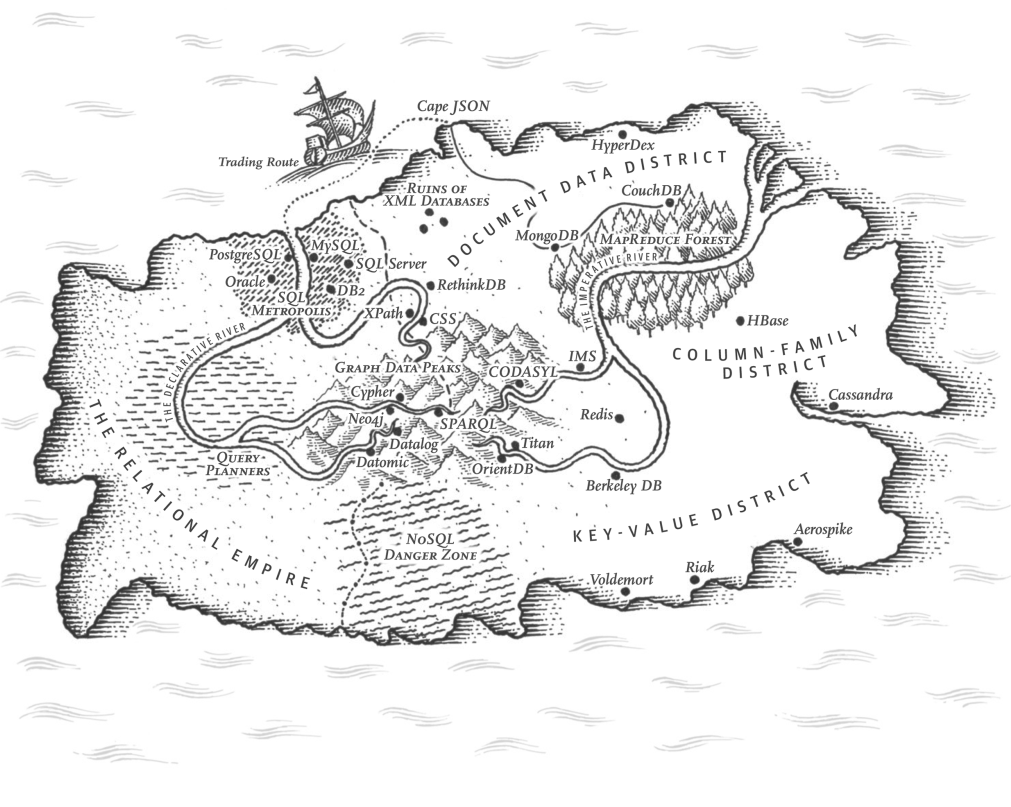 This section covers a range of data models for data storage and querying.

Best-known data model today is probably SQL, ased on the relational model proposed by Edgar Codd in 1970. data is organized into relations (called tables in SQL), where each relation is an unordered collection of tuples (rows in SQL).